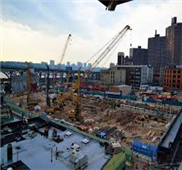 It is axiomatic that claims and disputes on a project do not simply appear out of nowhere.  Experience indicates that when a dispute occurs, there is normally a back story or history of events, decisions, lack of decisions, etc. that can be traced back from a few weeks to several years that gave rise to the dispute.  It is typically these past events or decisions that are identified as the “early warning signs” of claims and disputes.  Typically, it is only when claims are filed at the end of a project that attorneys and claims consultants review project documentation and interview the project team in order identify these early warnings.  And, in retrospect, many project team members comment “If only I had recognized that then!” Research reveals there is little literature setting forth a detailed list of early warning signs of pending construction claims and disputes.  Based on the collective observations of Navigant’s Global Construction Practice the Forum collated these early warning signs into the typical phases of a project including:

This webinar also identifies which party should watch for which early warning sign and what sort of claim or dispute may arise.

Jim is the Senior Advisor, Ankura Construction Forum™. The Forum strives to be the construction industry’s resource for thought leadership and best practices on avoidance and resolution of construction project disputes globally. Jim was eh founder and Executive Director of the Navigant Construction Forum™.  Formerly he was the Executive Director, Corporate Claims Management Group, Fluor Corporation, one of the world’s largest EPCM contractors. Mr. Zack was previously Vice President of PinnacleOne and the Executive Director of the PinnacleOne Institute and a Senior Construction Claims Consultant for CH2M HILL, Inc. Mr. Zack has, for 47 years, worked on both private and public projects throughout the U.S. and in 28 countries abroad. Mr. Zack is a Fellow of AACE International, the Royal Institution of Chartered Surveyors, and the Guild of Project Controls.  In the construction claims field, he is a recognized and published expert in mitigation, analysis and resolution or defense of construction claims and disputes.  Mr. Zack is a Certified Construction Manager (CCM), a Certified Forensic Claims Consultant (CFCC) and a Project Management Professional (PMP).  Mr. Zack is an internationally recognized author and speaker in the construction claims and disputes arena.