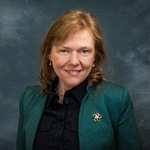 Peggy J. Berry, MBA, RAC, is the president and CEO of Synergy Consulting where she provides consulting services to companies in all aspects of drug development. She also provides group and one-on-one training in drug development, regulatory affairs and project management topics. Prior to founding Synergy Consulting in 2015, she was vice president of regulatory affairs at Insmed (2/2015-5/2015) where she was responsible for the development and implementation of global regulatory strategies and the management and oversight of the regulatory affairs department. Prior to Insmed, she was vice president of regulatory affairs and quality at Amarin (3/2009-2/2014). She has also held a variety of senior-level positions at Dyax (5/2006-3/2009), MGI Pharma (now Eisai; 7/2005-5/2006), AstraZeneca (10/2001-7/2005), and Dey Pharma (now Mylan; 12/1997-10/2001). She has also held regulatory affairs roles within two clinical contract research organizations (ILEX Oncology and Cato Research Ltd; 1992-1997) and has worked in review divisions at the FDA (1985-1992). In addition, Ms. Berry consults for a number of companies in the regulatory and quality area, conducts a number of training courses, and is active in the Regulatory Affairs Professionals Society. She is the editor of the 2010 book “Choosing the Right Regulatory Career” (RAPS, MD) and author of the 2011 book “Communication & Negotiation” (RAPS, MD).

This webinar will explore what SOPs are, what they are used for, when they are required, how to write them effectively for compliance and for implementation within the organization, and how to ensure effective communication and training of procedures within th ...

The information obtained will enable effectiveness and reliability of a review process for all materials. The webinar will address requirements for compliance within the US, “gray areas” that must be evaluated thoroughly, how to conduct a risk assessment, stra ...

The information obtained will enable preparation of effective internal systems for receiving, investigating and responding to product complaints during both the investigational and commercial stages.The webinar will address aspects of the review process, SOP p ...

This webinar will teach you to create stability protocols for drug substance and drug product, including long term stability; accelerated stability & special stability studies (e.g., light or oxygen sensitivity).Stability testing of pharmaceutical products is a compl ...

Early clinical trials are conducted to establish initial safety of a drug. The studies are generally in small number of healthy subjects and use lower doses of the drug product.  Therefore, only small amounts of investigational material are required. In order to ...

Documentation is the key to GMP compliance and ensures traceability of all development, manufacturing, and testing activities. Documentation provides the route for auditors to assess the overall quality of operations within a company and the final product. The we ...

This webinar will provide approaches to setting up an internal complaint handling system that ensures compliance with all GMP requirements. The information obtained will enable preparation of effective internal systems for receiving, investigating and responding ...